On October 26, smiles, emotions and networking marked the beginning of the second of ABLE Mentor in Sofia. Like the first edition of the project, this event was “a prelaunch one” – it aims to bring together only the mentors in order to introduce them in the program as a whole, to train and prepare them for “the adventures and obstacles,” which they might encounter while working with students during the program.
Amid Sunday October morning “conquered” by the cold, dozens of mentors gathered to embark on the adventure “My high school student – the huge unknown” to learn more about what to expect from their “students”, how to meet their expectations and how to be as useful as possible for them during the program.
The event was started “under the flag” of a social networking game in which mentors had the opportunity to get to know each other, share experiences and mutually energize themselves. Each of them was given a piece of paper glued to their back, on which the others could express in a written form their impressions from the person with whom they met. After a colorful bouquet of positivism and smiling faces thanks to the game, the second part of the informal opening ceremony of the program provided the audience with a detailed presentation of the ABLE Mentor project, its objectives, and expectations regarding the product of the work in student-mentor teams, accompanied by a conceptual framework of the workflow (ABLE Mentor Canvas) as well as recommendations for its successful implementation. The principle “in theory, practice and theory are equivalent, but in practice – not” incarnated in a very funny, but also useful ending of the program. The last module of the event provided mentors with a “practical” and real concept of what they might expect and encounter during the program within the mentor-student relationship and the challenges associated with them. For this purpose, ABLE “ascended mentors on boards”, dividing them into groups of eight people, within which half of them had to act as students, and the rest – as mentors. Then they had to play 2-minute scenes in pairs based on cases distributed in advance in which different student profiles were described – from brats and inflated teens to shy and timid ones. In each group there were 4 mini plays including the roles mentor-student, in which both sides had to find ways to mutualy understand themselves, i.e. synchronize their language, right approaches for an effective communication by trying to recreate their case to maximum extent. After each play, different groups discussed what they understood from the case and prescribed advices and solutions in this case for ameliorating . Thus, after the 45-minute theatrical challenge, all teams reached their own conception of the proper functioning of a mentor-student relationship and the personal qualities of the two sides, of crucial importance for understanding and smooth communication and workflow. Then all the groups presented their ideas to the others in order to build the common “product” of their Sunday training, summarize the important lessons and directions in working with students during the project. Eventually, the event concluded with the presentations of the project “in action” and “in examples” from the perspective of Virginia Lazarova, Ivo Anev and Verina Lefterova, three mentors from the first season of the program who talked about their personal experience in working with students enriching the vision and the expectations of the new mentors.

Full of energy, enthusiasm and a bunch of expectations, accompanied by the “mystery” of their still unknown students, mentors, as well as the whole team of ABLE look forward to the official opening ceremony for the second season on 2 November (Sunday), which will offer a colorful range of surprises and positive emotions, bringing together students and mentors, ready to dive into the cause for a better future youth.

In October Leader Talks gave us the chance to meet Mrs Veneta Andonova – a professor teaching at AUBG and a mentor at Eleven.

We discussed what is the entrepreneurial mindset and what kind of skill set an entrepreneur needs to have while she gave us valuable advice in what direction we should aim to develop ourselves as entrepreneurs to become really good ones. Veneta told us stories about what the entrepreneurship eco system looks like in Latin America and gave an a great example of one interesting man in particular and what makes him so unique – how he manages to achieve his goals in a place and time when many, many others cannot. His farm – Hacienda Gavilanes – working in a new innovative way, shows us how things can happen when there is a burning desire, a strong will and many efforts put in no matter the time and the circumstances.
“The entrepreneurial mindset is something really complex, it is being able to look at things from a totally different perspective, without letting the tragedy of the situation overcomes you”, says Mrs. Andonova.

We were also lucky to receive a few practical advice, based on Veneta`s long-lasting research – it is important to learn how to give constructive feedback as well as learn how to listen and understand the one given to us; she also told us that we should stop looking insanely for role models and advisors, as this makes us weaker and we start questioning our own abilities, this gets us away from testing on practice our ideas. What we should be looking for is the practical mechanisms, the tools these people use to make things happen and not warship what they have accomplished but look at ourselves and believe in what we can accomplish and learn how. She finished off the discussion with one challenge to all of us – to sit down and think about all the things we have and accept as given, things we think cannot change and write them down. After a day or two – get back to this list and go one by one thinking how to change them! 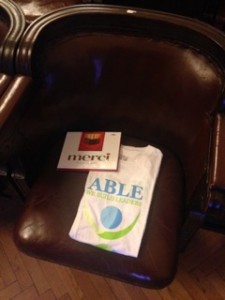 The beginning of the week turned into a lovely occasion for an sweet piece of entrepreneurial luxury in ABLE – The national finals of Get In The Ring. For a second consecutive year ABLE gathered talented teams with exceptional business concepts which transformed the stage into a great source of glamorous, energizing ecstasy. The event opposed 8 startups in direct fight for a place in the regional final of Eastern European amongst which the teams of Melissa Climate, Phantom Login, Yatoto, eMEDY, Clumsy Ox, Stepsss, Jobiome and Arthesis. All together they turned the podium into a treasury containing innovative approaches and visions, ideas, covering a wide range of technologies and markets – from health solutions to everyday intelligent “optimizations”. In front of over 100 people in the overcrowded room at Hilton hotel together with the three-member jury consisting of Hristo Tenchev (CEO and founder of XS-Software), Vladi Roussev (founder of Wizcom / Sciant) and Walter Rivera (Portfolio Manager of the Austrian venture capital company Fiedler Capita) teams provided an exceptional aesthetic and innovative delight that fascinated the members of the jury to a such extent that they were on the verge of sending at least 2 teams to the regional. Alas, the regulation is regulation and ultimately, only one of the teams had the occasion for standing Sam – the fresh and exceptionally energetic team of Stepsss. Their idea is based on the development of versatile high-tech shoe insoles with built-in sensors that transfer data wirelessly to the smartphone of the user, (supplemented by an online database), then being processed and ensuring the monitoring of the running, including detailed statistics and optimization solutions for improving the technique of movement in order to transform this sport in a painless pleasure for many people who often face injuries due to improper technique of movement. Apart from the first place and the right to participate in the regional final, Stepsss received two additional awards from the jury – a start-up training program provided by Softlayer Catalyst and business valuation, kindly provided by the company Equidam. Nevertheless, “The Ring” did not obey the principle of total domination (courtesy of the jury), rewarding also the team of Melissa Climate, which fascinated the audience with its idea for energy efficient remote control of air conditioning systems thanks to a dedicated mobile smartphone application combined with universal hardware recognizing conditioners from all trades and models, allowing remote programming of functions of every air conditioner also capable of storing different sets of modes, as well as providing a wide array of energy optimization proposals. Runners-up received a prize from Remark Consulting. Thus, the aftermath of the titanic entrepreneurial clash on a national level is Stepsss, who will defend our national honor during the regional final for Eastern Europe on November 17 in Sofia, hosted again be ABLE. Let’s wish success to our representatives and hopefully enjoy an even more spectacular battle next month. 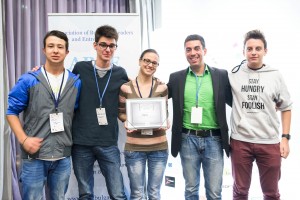 Some ABLE members had a chance to visit another very interesting and full of amazing speakers event – StartUp Conference NEXT, which happened last weekend – on the 10th and 11th October in Sofia Event Center and it was the 8th in a row that the StartUp Foundation proudly organizes. ‘This year the Conference is focused on stimulating growth’ says Chris Georgiev, a serial entrepreneur and organizer. The Conference was held in English language, many speakers from Bulgaria and other countries were invited. There were about 500 visitors who came to learn how to grow their business and expand into foreign markets, how to differentiate and get out of the limited Bulgarian eco system making business connections with entrepreneurs from all around. Some of the hot topics that were discussed were women in leadership roles and women in entrepreneurship, start-up funding, global reach, design thinking, customer acquisition and retention.

Bob Dorf, the father of entrepreneurship, considered to be one of the most influential speakers was invited from Junior Achievement Bulgaria. He is one of the founders of the san startup methodology. His world-renowned bestseller ‘The Start-Up Owner`s Manual’, co-authored with Steve Blank is a must read for every single entrepreneur in the world.

The Conference was open by the U.S. Ambassador in Bulgaria Mrs. Marcie Riss. There were a total of 33 speakers from Bulgaria and abroad, some of whom were Devin Hunt, Marvin Liao, Connor Murphy, Rob Fitzpatrick, Jordan Schlipf, Max Gurvits, Tobias Stone, Veneta Andonova, Veneta Stycheva, Luci Montel, Elina Zheleva, Ivelina Manova, Monika Kovachka-Dimitrova and others. There were a total of 4 discussion panels, over 15 personal presentations, a Start Trek discussion platform organized by the Bulgarian accelerator 11 and many networking opportunities.

During the time of the conference a new media that will represent the Bulgarian startups to the world – http://startups.bg/ was announced, as well as 2 new competitions: he StartUP Awards, which will take place in December and the third edition of the MobileApp VIVACOM Competition – #newbornideas.

This September was the third anniversary of Leader Talks and on 29.09 its fourth year began meeting us with Julieta Serafimova – General manager of Grand Hotel Sofia and Business development manager of Sofia Hotels management – a management company of the three NIKMI owned hotels Grand Hotel Sofia, Sofia suite hotel and Central Park Sofia. Together with her the Leader Talks audience talked about the leadership in the management and she personally reiterated the principle: Hire for attitude, train for skills. She also highlighted as a desirable trait of the leader the quick analysis of the situation and decision making, as well as giving freedom to one’s imagination for the business development to certain extend allowed by the glass ceiling that we all meet.

Last but not least, as a longtime professional in the hotel business with Bulgarian and international experience, Mrs. Serafimova put an accent on how important it is to sell the personal image of the leader: from the attire and manners through the social media profile. 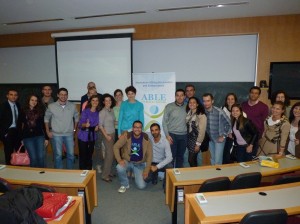